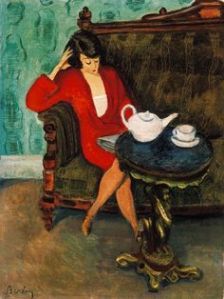 February was not really a great reading month, I’m afraid. With the exception of a couple of very good crime novels, Claire McGowan’s A Savage Hunger, which I reviewed in the previous post, and Alafair Burke’s The Ex, the review for which will be in the next edition of Shiny New Books, I wasn’t really knocked out by anything else that I read. Mind you, as a month it had a lot to live up to given that my January reading included Elizabeth Strout’s My Name is Lucy Barton and Eva Dolan’s After You Die and, even though it had an extra day, February is still a short month so I won’t complain too much but just look forward to March and hope for better things.

My book group reading consists of two re-reads balanced by not only a book but an author that is new to me. The Monday Group asked for some crime fiction and as that is a group set up to look at novels shortlisted for book awards I decided to go for Sara Paretsky’s Blacklist which won the Crime Writers’ Association Gold Dagger in 2004.  I’m not certain how well this is going to go down, but I enjoy the way in which Paretsky explores the links between crime, politics and big business interests and makes it clear that while you may catch the people at the bottom, or even those in the middle, at the moment bringing down those at the top is still proving more than difficult. If nothing else it will introduce almost everyone in that group to an author they haven’t read before.

The other re-read is Huxley’s Brave New World.  I did this with a different group a couple of years ago and it works really well in discussion not only in respect of its literary merits but also in terms of asking just how prophetic the author’s vision was.  I have to say that I’m not certain myself that Huxley intended it to be prophetic but it’s a good point for debate, nevertheless.  My only qualm about that one is that we have one member in the group who always wants happy books, suitable for (and I quote!) ladies of a certain age. I’m not sure quite what she’s going to make of this.

The author new to me is Adam Foulds and the book that has been chosen is his first novel, The Truth About These Strange Times.  Other than that I’ve had quite a job getting a copy from the library I know nothing about this at all, so if any of you have read it and have any comments before I start on it next week I shall be interested to read them.

As far as other reading goes the month is going to primarily taken up with tackling all those books that I said I was going to read over my long weekend off.  I hadn’t realised just how tired I was and in the end I found myself doing more re-reading simply because I hadn’t the energy to tackle anything new. I did read one of the review copies I had on hand and I began Helen Dunmore’s Exposure, but, for personal reasons, I’ve found it a particularly difficult read and I’m having to take it just in small sections.  I’ll talk more about that when I review it.  That does mean, however, that I still have Slade House and The Noise of Time waiting to be read as well as a couple of crime novels to review for NetGalley.  Given all that I don’t think I should be looking any further ahead right now. I can add to the list if I find I’m running out of material.  At the moment, that seems unlikely.