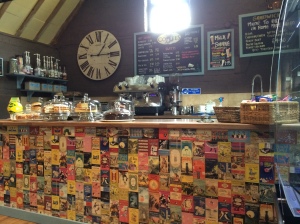 What more could anyone ever ask than a book shop combined with a tea room which sells home made cakes?  Is there any better definition of heaven?  If so, I don’t think I’ve come across it and neither do I think I want to.

Having nothing better to do with my day :-), yesterday I went over to the Astley Book Farm, which, for those of you who know my neck of the woods, is between Meridan and Nuneaton and for those of you who don’t, lies bang smack in the middle of George Eliot country.  It is one of the biggest second hand book shops in Britain and a place that you should only ever enter after having already negotiated an overdraft with your bank manager.

It takes me about an hour to get there so of course the first necessity is a visit to the tearoom for what Pooh Bear would have described as a little something.  I would describe it as a very large slice of fruit cake.  They don’t do things by halves anywhere in this shop.  Please also pay heed to the proper teapot.  I notice these things. Tea out of one of those metal contraptions just doesn’t taste the same.

Suitably fed and watered you then move out of the refreshment area and into the main body of the bookshop.  It is advisable to bring a ball of twine with you because otherwise you may never find your way out of the labyrinthine layout of rooms and the shelves within those rooms.  I found it too complex to get any good pictures but if you follow the link above onto their website you will get some idea of what it is like.  In fact, there are so many books here that I find it a good idea to go over with at the very least a wish list of the authors whose works I might be looking for.  It would take you a full day to make your way carefully through all the nooks and crannies and so just lighting on one of those really special finds takes hard work here.

One area to which I am always drawn is the section where they keep all the volumes published by the Folio Society. They still tend to cost more than I can afford, but nevertheless I can always dream – this time most particularly about a lovely set of Andrew Lang’s collections of fairytales.  I suppose I might just have been able to buy one, but how would I ever have chosen which?  Also, tucked away up on the top right is a complete Pepys Diary.  I tell you, I am still lusting now.

So, what did I come away with?  I was very good and only collected four more volumes for the tbr pile.  The one on top is a volume of essays by Anne Fadiman, At Large and At Small.  I bought her collection Ex Libris some years ago and had to force myself to eke the essays out so as not to gorge on them all at once and make myself sick.  These are not in the main essays about books and reading, but I liked her style enough to want to read more whatever she might be writing about.  Besides, I was only complaining to a friend earlier in the week that I didn’t read enough essays so I’m hoping that these will kick start a habit.

Second in the pile is Laura Wilson’s first novel, A Little Death.  I’ve read and loved all of her DI Stratton books but haven’t read any of her other works.  Like the Stratton novels this is also crime fiction set in London and near enough in the period of her most recent book, the mid 1950s.  This is the time of my own childhood and so I’m going to be fascinated to see what memories it recalls.  If I remember correctly, Litlove was very complementary about this and so with a recommendation as strong as that it is probably the purchase to which I will turn first.

Then there is an early novel by Patrick Gale, The Facts of Life.  I only ‘discovered’ Gale in 2007 when he published Notes From an Exhibition, which I absolutely loved, so I have quite a back catalogue to explore.  Like Notes this book is concerned with a creative artist, in this instance a composer, Edward Pepper, exiled from his native Germany during the war.  Pepper marries an English woman and together they set up home in a bizarre folly which over the following decades is witness to the twists and turns of family life through the generations.  Gale is particularly good at letting character reveal itself through snapshots of events that take place over an extended period of time and I’m hoping that this hefty book (well over 500 pages) will work in the same way.

Finally, my pick from the remainders bin, a Peter Carey that I haven’t yet read, My Life as a Fake.  This is a good hardback copy that cost me only a pound because apparently they can’t get rid of Carey’s work.  I pause to shake my head in wonderment at the folly of North Warwickshire readers.  I love Carey and this is practically the last novel on the list needed to give me a full set of his works.  Using as a springboard an actual hoax that was perpetrated in Australia in the 1940s, Carey tells the story of a conservative young poet who decides to teach the literary establishment a lesson about pretension and authenticity by writing a sequence of lurid verses that he claims are the output of a working class poet conveniently dead at twenty-four.  Not only is everyone taken in by these works but the editor of the magazine that publishes them is prosecuted for obscenity.  However, in the middle of the trial a man who bears an uncanny resemblance to the fake picture of the poet appears and claims to be the writer himself.  No doubt, the twists and the turns start from there.

So, not a bad haul, I think.  After several beautiful days it is now pouring down here so there is nothing to take me out and nothing to get in the way of settling down to a very good read.

Your thoughts are welcome Cancel reply